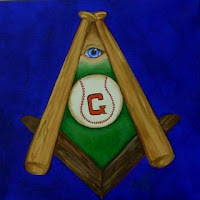 Yesterday's Sports Illustrated ran a story, and the BBC posted an interview with historian Julian Pooley, indicating that "America's pastime," the game of baseball, may actually have been imported from England.

A diary entry from 1755, 84 years before Abner Doubleday mythically "invented" baseball, suggests that it was commonly played in the British Isles. (I found no evidence that Doubleday, the U.S. captain later promoted to general who fired the first Union cannonball at Fort Sumter which began the American Civil War, was a Freemason, but he was a prominent member and president of the Theosophical Society.)

During this time period in Britain, a "new" group called the Freemasons also became a popular way to wile away the hours.

The numerology-and-conspiracy obsessed blog Through the Looking Glass today upped the ante with a reference to baseball's origins being Masonic. Quoting Randy Lavello's article on PrisonPlanet.com, they give us:

"Baseball was obviously created by Freemasons, as it bears the unmistakable marks of Freemasonry. The field, from home plate to the left and right field wall forms a compass; the entire outfield wall is the semicircle which this compass draws. Upside-down, overlapping this compass, the bases form the square. Thus, the baseball field is the emblem of Freemasonry. Three strikes and three outs were assigned because three is the principle sacred number of Freemasonry. Four is a number of significance because it represents a square (the shape) and deals with the four directions, thus: four balls, four bases. Nine is sacred because it is three squared... there are nine fielding positions and nine innings. This brings us to a total of twenty-seven outs per team a game…and guess what? Twenty-seven, along with eighty-one, are the only two sacred numbers greater than ten. Though eighty-one doesn't occur in baseball, because of the presence of two nines (fielders and innings) it's appropriate to mention the reason eighty-one is so revered: the multiples of nine, 9, 18, 27, 36, 45, 54, 63, 72, 81, and 90 form a mirror image between the numbers 45 and 54. Also, each one of these numbers equal nine when adding the two integers which comprise the number: 18- 1+8 = 9; 27- 2+7 =9; etc. Because of this, nine times nine was deemed a 'high' number. This further explains the near obsession with numbers surrounding baseball averages, home runs, ERA's, etc. It is truly a game for numerologists.

Went to Stoke Ch. This morning. After Dinner Went to Miss Jeale's to play at Base Ball with her, the 3 Miss Whiteheads, Miss Billinghurst, Miss Molly Flutter, Mr. Chandler, Mr. Ford & H. Parsons & Jelly. Drank Tea and stayed till 8.

As most of us know, playing baseball has another meaning, a sort of code for sex.

Remember the first time you "got to first base"? Or "scored"? Or "drove it home."

As we've supposed here on The Taper before, the Masonic square and compasses may represent the merging of earth and sky, and by extension, the sexual union between man and woman which results in new life, or "Generation," symbolized by the letter G.

And as our brothers in the Royal Order of Jesters have shown us over and over, the Jesters' use of the word "mirth" is code for "sex."

After all, sex is America's (and the world's) real pastime.