Would you sit in lodge with a Prince Hall Mason? 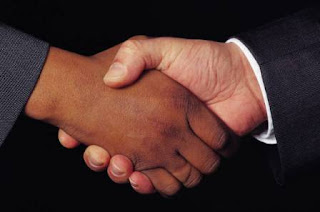 Last month I had the pleasure of attending an Entered Apprentice degree at St. John's Lodge No. 2, in Middletown, Connecticut. I was warmly accepted as a brother, and had a great time.

The Grand Lodge of Georgia, under whose jurisdiction my lodge works, does not recognize Prince Hall members as being legitimate brothers, and in fact, considers Prince Hall lodges to be clandestine.

Personally, I find the Grand Lodge of Georgia's refusal to recognize Prince Hall Masons abhorrent. Well over a year ago on this blog, I openly called for the Grand Lodge of Georgia to immediately recognize Prince Hall Masonry. Not recognizing brothers as Masons because of the color of their skin strikes me as utterly unmasonic. How hypocritical can we be, saying one of our tenets is "brotherly love" while refusing to recognize our brothers?

In fact, I find the forced segregation goes against the duties I owe to my God, my country, my neighbors and most especially myself. I am not a racist, and cannot understand it in another human nor, especially, in an organization that promotes itself as the champion of universal brotherhood.

But here I am, a Georgia Mason, apparently carrying the stink of my Grand Lodge's institutionalized racism with me when I sojourn afar.

Prefacing his question with "you don't have to answer this," after conducting my examination to assure I was a Mason, the Grand Marshal of Connecticut asked me what I would do if that night a Prince Hall Mason had been in attendance at St. John's Lodge.

Since I didn't have to answer, and there was no Prince Hall Mason visiting, I didn't answer, but have thought about it since. In an article about my visit to St. John's, I later said that I would have gone in, and welcomed the opportunity to sit with a Prince Hall Mason, believing that at that time I was in the jurisdiction of the Connecticut grand lodge, not the Georgia grand lodge.

As I've said before, I'm not a legal scholar, civil or Masonic. And further, being a racist or giving a damn what racists think just doesn't work for me.

The whole recognition thing is a smokescreen for racism, pure and simple. If I were to invite to my lodge an African-American brother, raised in a "regular" lodge of another state, or in a military lodge under the jurisdiction of another state that accepted blacks, I'd bet dollars to donuts he wouldn't be allowed in, even if I vouched for him.

But the rules and obligations? Was I under the jurisdiction of Connecticut, or Georgia, when I was visiting in Connecticut? If they recognize Prince Hall, can or should I sit with a Prince Hall Mason, or am I bound to the antiquated Georgia racist rules with which I emphatically disagree?

Brother Ashok from Hong Kong wrote to me the following, explaining how the United Grand Lodge of England, under whose jurisdiction his lodge operates, perceives brethren visiting outside their home lodge:

I try to read your interesting and informative blog on a weekly basis but I don't always succeed.

In "That which was found" you wrote: "A sojourning Mason temporarily falls under the jurisdiction of a regular Grand Lodge of the state in which he is visiting. Since I was in Connecticut, the rules and recognitions of that Grand Lodge are supreme."

Understandably, as a visiting or sojourning brother, I would try to conform to the requirements of the host GL, although the customs of my Mother Lodge or GL may sometimes vary and/or take precedent.

UGLE advises its members: In visiting a jurisdiction which, quite legitimately so far as it is concerned, accepts visitors from GLs which are not recognised by UGLE, brethren are reminded that it is part of their duty as members of UGLE not to associate masonically with members of such unrecognised GLs, and should such a situation arise, they should tactfully withdraw, even through their visit may have been formally or officially arranged....

I appreciate Bro. Ashok's email, and the message he brings me from the UGLE.

I remember well the night I was raised. After the formalities were over, but still in tyled lodge, a brother approached the altar to explain some of the things I'd just been through and the obligations. When he got to the part about "clandestine" lodges, he said, "...the only clandestine lodges we know of are the black lodges."

Immediately the thought hit me like a truckful of bricks: "Oh, s#!t... have I joined the Klan?"

Had I realized at the time how racist the Grand Lodge of Georgia and my local brethren were, I would never have become a Mason.

(To those who feel the need to comment, "Then quit if you don't like our rules," I say, "Nope. Too late. I'm a Mason and I'm going to stay that way, and work towards positive changes for the fraternity.")

What would you have done, in my place, a non-racist Mason from a racist Grand Lodge, if you visited a non-racist lodge in another jurisdiction and a Prince Hall Mason was also visiting? And why? Please elaborate.