We all shine on: Bro. Greg Stewart, AKA Masonic Traveler

Here it is, the 18th installment of "We All Shine On," The Burning Taper's never-ending series of essays from online Freemasons and other readers of this blog. Today's is from Bro. Greg Stewart, also known as Masonic Traveler. Thanks for writing, Bro. Greg!

The title of this makes me think of the Moby song, "We are all made of Stars."

My name is Greg Stewart. I go by the moniker of Masonic Traveler. I post when I can to my blog of the same name at MasonicTraveler.com. I also edit and own a website called FreemasonInformation.com.

As you can probably guess, I am a Freemason. I fall by habitation under the Grand Lodge of California, where I live with my wife Diane and my two sons. I have been a Freemason now for 11 years, with varying degrees of activity and participation. When I became a Mason, I did not know anything of what the organization was about. I had a good friend who was one, and after a lot of conversations on the subject with him at work, I asked him that fateful question that we all come to: "...How do you join?"

For the record, I should probably state my affiliations and memberships. I am a 3rd degree Master Mason, raised at Burbank Lodge, No. 406. Today, I am an active member of Hollywood Masonic Lodge No. 355 in Tarzana, California. In that lodge I play several roles including its Communications Chairmen, Masonic Formation Officer, and Symbolism/Education instructor. Monthly I host in our lodge library a symbolism class that talks about and tries to put shape to the myriad of symbolic images and allegories that Masonry immerses us into. Doing this has given me a tremendous opportunity to think about and try to correlate them into a practical way to what their meanings are, but suffice it to say that I am still learning new ways to look at and interpret them. 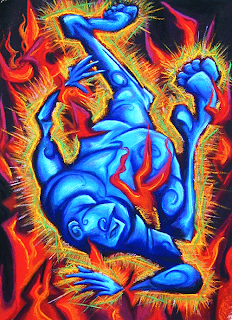 I also am a 32nd Degree Scottish Rite Freemason in the Valley of Pasadena, in the Orient of California, and play a part in the 27th degree as the Prince of Mercy. Also, this year, I am the last in the line of the Consistory as the Captain of the Guard. Sadly, I don’t make many Rite meetings as they meet on Fridays, and with two adolescent boys, it's better time spent with them.

I have petitioned the York, but keep getting waylaid in my taking of the degrees. Most likely I will have that under my belt soon though. In some ways it feels like I'm collecting merit badges like the Boy Scouts, but I am genuinely interested in the varying allegories that that the different traditions have to teach.

Some other bits that would fit into this long bio is that I have memberships in "other" secret societies that are similar in tone to Freemasonry, I flirt with the idea of looking into the OTO, I have belonged to 5 brands of Christianity, schooled under one, baptized under another, and at this juncture find myself with more in common with United Unitarians than any other. The irony in all of this is that when I take the little social networking quizzes, invariably, I come out as a "Neo Pagan." Go figure. Lately I've found some resonance with Hinduism and have just been creeping into the pages of Theosophy.

My thoughts on Masonry are many, the most profound I think is that I see Freemasonry as a religion. I've argued with many on the net about it and will likely continue to. The position is a fair one in that I see Freemasonry as the practice of carrying forward a set of proscribed ritual that is meant to convey a particular message. Make special note here that this does NOT mean it is a faith, as each man (or woman) who comes to the fraternity should already have that part of himself taken care of. Simply, what we do we have done for centuries, and for that same period of time its been done in the near same way and for the same reason, which is fundamentally the definition of what religion means. But this is topic for another time and place....

Outside of freemasonry, and something I seem to cycle back into every few years is art. My background is in fine and digital art, as I went to college for it, and I have drawn and painted for most of my life. Embedded in this article are some of my visual creations for various projects or times. My passion was pastel on paper in which I have created some of my most visceral work. But, like moods, mine at the present has shifted from this as most of my attention is focused on Masonry. Still pulling from my artistry, I have applied my digital skills to assemble two Masonic Tracing Boards Presently I am working on the third.... If you want to see more of the art I've made, I have a website as a portfolio piece at GregoryStewart.com.

Needless to say masonry is a big part of my being, maybe because it is something I treat as a religion that I see it as such. I want to see Masonry restored to its former incarnation, in that I would love to see lodge rooms filled with men (and maybe one day women) who all have a passionate interest in community, specifically as it applies to brotherly love, relief, and truth. It's this part of me that has just recently started looking at ways to help some of the local charities here where I live, and that's the project in the wings.

Philosophically, I defer to Moby...

Thanks for this opportunity to shine!

To submit your own "This is Who I Am" essay, read this.

Labels: Art, Artists, Greg Stewart, Masonic Traveler, This is Who I Am, We All Shine On