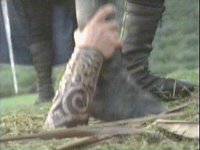 If you haven't read Part One: Bucket of Rattlesnakes, please do so and then return here to read Part Two.

While making comments to add to a post on Free-Mason-Alert yesterday, I inadvertently found myself writing Part Two of my story "Small Town Freemasonry." Let's call this chapter "The Masonic Ambush."

The brother who writes Free-Mason-Alert had related how a visitor to a sister lodge had worn a 100-year-old York Rite apron to a Master Mason degree where he was assisting. Someone at the lodge took offense to the unusual apron and instead of simply asking the brother about it, took it upon himself to call the Grand Master of Alabama to complain! The GM then fired off emails to the "offending" brother accusing him of wearing a "clandestine" apron of the Rose Cross of Gold.

I wrote this in response:

Apparently running to the Grand Master every time something happens in a lodge that someone doesn't like is the typical way things are done in the rural South.

Lodges should be fully capable of handling their own issues without having to "run to daddy" every time the peace and harmony is breached.

As my lodge's webmaster, I posted news from my lodge on the website I ran for the lodge. About two weeks after I posted a particular news item, I received a frantic call from a Past Master of my lodge, demanding that I take that material off the web immediately. I refused, and then set up a meeting with the lodge's Master and Senior Warden. I was Junior Warden. We planned a meeting for that evening to decide what course of action we wanted to take regarding the information that had been placed online.

An hour later, the PM who had called me in the first place called back again, saying he had taken it upon himself to call the Grand Master ("I know him," he said), and that the Grand Master had told him to tell me to take the information offline. I politely told the PM to have the GM phone or email me with that "order," and I would remove the information.

The elected chief officers of the lodge — the WM, SW and me — met and decided what course we wanted to take; we were going to put the question to a vote of the lodge. We never heard from the GM, only from the PM supposedly relaying his words.

The next evening was our regular communication. As soon as I arrived, I was asked to "come in here" by a different Past Master, and when I entered the preparation room I found myself face-to-face with three PM's of our lodge, already wearing their aprons and their stern faces. This episode has come to be known as the Masonic Ambush.

In a scene reminiscent of a Monty Python sketch, they told me three times: "We demand that you remove the information from the website."

Twice I told them that the elected officers of the lodge had made a fair decision about what to do, that we were going to have the lodge vote on it.

"But we don't want you to be embarrassed when you lose the vote," they chorused.

I really didn't care one way or the other how the vote came out. I simply wanted to get out of the preparation room. I didn't feel physically threatened, but I certainly felt emotionally disheveled by the event. Here were three men representing together over 100 years of Masonry, men whom I (at the time) respected. Two of them had coached me through my catechisms. I had no desire to go against their wishes....

But they were wrong. Wrong in the way they'd approached me, and certainly wrong in making demands of an officer, especially after they were told that the WM was aware of the issues and was prepared to handle it in a fair way (with a vote).

At the New Business point in the meeting, I stood and told about what had happened, not just the ambush but the entire story, and called for a vote. Two of the PM's stood and spoke against me, and against the information being presented on the website.

Oh, haven't I mentioned what this was all about? Our lodge had a brother who pleaded guilty to sexual exploitation of a minor in state court, and he was at that time under charges of gross unMasonic conduct for the same. Pursuant to my understanding of Masonic Code which says we should publicize that type of thing so as to show we as Masons do not condone it, I had simply announced those facts on our lodge's website.

The vote was overwhelming in favor of hiding this information from the public by removing if from the website, and not in publicizing it so that the public would know that we didn't condone the actions of the offending brother.

That didn't end the situation. It was only just the beginning.

Later that week, the WM, now aware of what had been happening, issued a summons for an "emergency meeting" of himself, the four PMs, and me, plus two other brothers: One, a "neutral" PM, the other a younger brother who had supported my actions by speaking up in the lodge meeting the previous Tuesday night. The PM who started the whole thing with the phone call didn't attend; everyone else showed up.

At this meeting, two of the ambushing PM's made mild apologies to me for "hurting my feelings" (it wasn't my feelings they'd hurt, but my respect for them and my pride in being a part of that lodge). The third PM simply barked that if the younger brother spoke, he would leave.

After one of the PM's told the younger brother, "You don't know what Freemasonry is about," the younger brother stood to speak. Immediately, the third PM stood and banged his metal chair loudly (we were in the dining hall area) and stomped off in a huff.

Needless to say, no one left the meeting feeling better about any of what had happened.

Small Town Freemasonry — Part Three: A Day in the Life of a Junior Warden