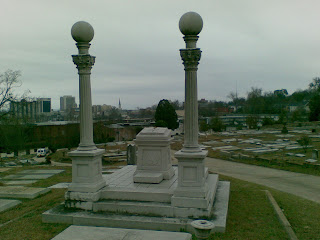 Rose Hill Cemetery in Macon, Georgia, was established by the then 16-year old city in 1840. It was designed by Simri Rose, city councilman and newspaper editor. He was also a gardener, horticulturist and amateur landscape designer. After a trip to the then recently established Mount Auburn Cemetery in Boston, Rose retured to Macon to focus attention on building a cemetery-park that combined irregular, meandering paths, streams and pools in a tiered, layered layout that rises and falls 142 feet above the river bed. He planted rare and exotic trees to compliment the native flora, including oriental cypress, balm of Gilead, firs, hemlock, arbor vitae, juniper, wild olive, broom, thorn and furze alongside the native oak, beech, poplar and sycamore.

Simri Rose is buried along the bank of the Ocmulgee River in the cemetery that bears his name.

Over 20,000 people are buried there. Some were or still are famous; some were known and loved only by immediate family and friends. Governors, judges, soldiers from both sides of the American Civil War, mayors, railroad men, and rock stars are buried at Rose Hill. Many Freemasons are buried there. Separate sections hold the graves of over 600 Confederate soldiers, for those of the Hebrew faith, for Catholics. In the earliest days, one section of the cemetery, known as Oak Ridge, was kept separate for favored slaves, the plots being purchased by their masters. 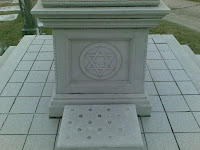 I grew up in Macon, and drove past the cemetery many, many times, but it was just this week, while in town for the Christmas holidays, that I finally spent a few hours walking through the huge, park-like setting of Rose Hill. I took over a hundred photos of graves, tombs, mausoleums, and other monuments to those now departed. Some of the more interesting pictures I'll share with you in this and perhaps later articles.

Many of the older grave monuments had the Masonic Square and Compasses engraved upon them. While some had the letter G inside the S&C, most of the older Masonic markers did not.

Macon is also the home of the Grand Lodge of Georgia. The grand lodge building stands a half mile or less from the cemetery's main gate.

Just inside the entrance to Rose Hill, with a backdrop of the city skyline, are the graves of two of the Grand Lodge of Georgia's early Grand Secretaries, Andrew Martin Wolihin (1831-1897) and his son, William A. Wolihin (1862-1916). The senior Wolihin served as a captain in the Confederate Army, fighting against the Union in Tennessee and Georgia. 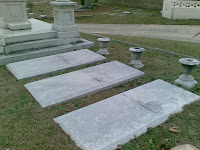 Sometime in the early 20th century, the Wolihin family erected a monument to Bros. Andrew and William. It's perhaps the most extraordinary Masonic sculpture I've ever seen. The columns Jachin and Boaz, complete with globes atop them, stand in front of and to each side of a holy altar upon which rests the Volume of Sacred Law and the Square and Compasses. A knee rest is in front of the altar.

Masonic Lodge No. 132 in Crawfordville, Georgia, is named for Bro. Andrew M. Wolihin. Crawfordville is about 90 miles northeast of Macon.

Capt. Wolihin was one of three captains who served at the Battle of Chickamauga in the Georgia Battery of Maj. Austin Leyden's Artillery Brigade. In a cosmic Masonic coincidence that I note only in passing, the other two captains were named Tyler M. Peeples and Billington W. York. 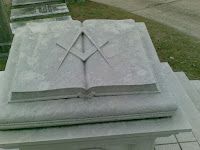 Judging from this mention in the 1896 (the year before he died) Transactions of the [Georgia] Royal and Select Masters, the senior Bro. Wolihin was also a Companion of the York Rite. Sorrow at his death was mentioned in the 1897 Proceedings of the Grand Lodge of North Dakota, indicating that the senior Bro. Wolihin was well respected throughout the American Masonic brotherhood.

Vandals, a series of tornadoes in the 1950's, and simply the passing of time have changed the landscape of Rose Hill Cemetery from what it was when it began, but it remains a beautiful and moving place. [Click for map of cemetery.]

Rose Hill Cemetery is located on Riverside Drive in Macon, Georgia, near the interchange of Interstates 75 and 16 [map]. If you find yourself traveling through Georgia, to or from Florida along I-75 or to or from the Georgia coast along I-16, you're just minutes from an incredible historical treasure.

As I sort through my photos, I'll post some of the more interesting ones, with commentary.