The Christian States of America 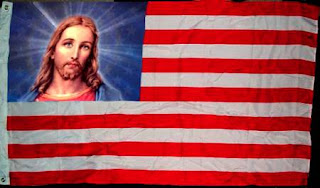 If belief creates reality, it's no wonder we're living in a Bizarro World.

Sixty-five percent (nearly two-thirds) of the respondents said they believed the nation's founders intended the United States to be a Christian nation, and 55% believe that the Constitution establishes a Christian nation.

A full 29% either refused to answer the above questions or flat out admitted they just didn't know!

Let that sink in for a moment.

One in four Americans believes that we have too much freedom!

Twenty-eight percent believe that the First Amendment's guarantee of freedom of religion "was never meant to apply to religious groups that the majority of the people consider extreme or on the fringe."

Twenty-six percent of all respondents said they were "fundamentalist/evangelical Christians." If I remember high school algebra, that means that .26 / .73 = nearly 36% of the Christians interviewed considered themselves fundamentalists and/or evangelicals.

To me, the most telling of all the statistics is the section asking where the respondents primarily get their news. Sixty-one percent of the respondents said they got most of their news from passive sources, that is, television (52%) and radio (9%).

Twenty-one percent get their news from what I would call, for lack of a better term, active sources (newspapers, 20%; magazines, 1%.) By active, I mean, in comparison to TV and radio, where you don't usually actually think about the news, at least not while you're receiving it. With magazines and newspapers, at least you choose the pace at which you try to absorb a news story, and you have the choice of whether to actually read a story or not. With rapid-fire TV and radio, you're usually just bombarded, and before you can decide if you actually want to know about a story, yet another story is being presented. Often, you're not only given the story, but told, directly or indirectly, what you should think about it.

Fifteen percent said they got their news from the Internet, and four percent said "other," whatever that means. Again, for lack of a better term, I would call news you get from the Internet "interactive." You choose what to read. You can take your time thinking about what you've read, and leisurely form an opinion. In many cases, whether on news organization sites or on personal blogs, you can interact with others by posting your own opinions, conclusions, disagreements or rebuttals.

It's my hypothesis, which of course cannot be proved or disproved without access to the individual survey forms, that the readers (of magazines, newspapers and Internet) in this survey held more liberal or libertarian views, and knew more about, and held in a higher regard (or even higher reverence), the First Amendment, while those who got their news spoon-fed to them by television and radio talking heads and pundits held the more "conservative," anti-freedom viewpoints, and knew less about, and valued less, the freedoms enumerated in the First Amendment.

Agree? Disagree? Come on... be interactive!

You can find the actual survey questions and answer tables in a PDF file provided by the First Amendment Center. You can also find the Center's original press release on their site.