Masonic cornerstone laying ceremony: What does it mean? 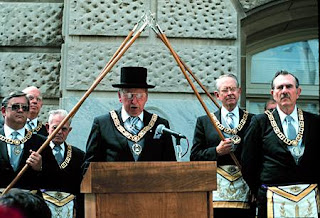 On March 24 comes the cornerstone dedication.

For hundreds of years it has been customary to have Freemasons perform a dedication ritual to "bless" the cornerstone of a public building.

This scares the willies out of evangelical Christians and paranoid, anti-Masonic conspiracy theorists. A few weeks ago we mentioned the "panic" the cornerstone at the Denver airport has caused in those prone to seeing New World Order symbolism everywhere.

Anyway... what's the point of a Masonic cornerstone dedication ritual? What does it entail?

A Masonic cornerstone ritual is probably the only Masonic ritual, other than a Masonic funeral, that the public (known masonically as "profanes") will ever see conducted. When the brethren are sharply dressed, and well-rehearsed, it's an awesome thing to behold. I recall watching on C-SPAN back in the early 1990s, before I was a Freemason, the Masonic re-dedication of the cornerstone at the U.S. Capitol.

The dedication ceremony is the symbolic laying of the cornerstone, that which supports (again, symbolically) the entire structure. When the cornerstone is discussed, by extension, it refers to the entire building project, and that, in turn refers not only to the actual physical actions to erect the building, but also to the mental, spiritual, even metaphysical energies that have come together to cause the creation of the edifice. The officers conducting the ceremony, usually officers of the state's Grand Lodge, symbolically square, level, and plumb the cornerstone, assuring that it is set correctly, that "the Craftsmen have done their duty."

After the Grand Lodge officers have squared, leveled and plumbed the cornerstone, the Grand Master "finishes the work" by proclaiming the foundation stone "well formed, true and trusty."

The Grand Master then "blesses," for lack of a better word, the cornerstone (again, which by extension, represents the entire project) by pouring corn (which means grain, and doesn't necessarily have to be maize), wine and oil.

The Corn of Nourishment symbolizes health and heartiness of the workers.

The Wine of Refreshment symbolizes plenty.

The Oil of Joy symbolizes peace and joy.

There is no "magical" effect; the Grand Master has no power to bestow these benefits. He is, quite simply, asking that these benefits and blessings be bestowed upon the project and the people by the GAOTU, the Great Architect of the Universe, God.

In the cornerstone leveling ceremony it is permissible, but not necessary, to open a Master Mason's Lodge. A Representation of the Grand Lodge is opened and called off for the purpose of leveling the cornerstone.

GRAND MASTER: Right Worshipful Grand Senior Warden, the Grand Lodge of Texas having been invited to lay the cornerstone of this edifice, and having assembled for that purpose, I now order that this, the Representation of the Grand Lodge of Texas, do now assist me in the performance of this work. This my will and pleasure you will, therefore, proclaim to the Grand Junior Warden, that the Brethren and others present may have due notice thereof.

GRAND SENIOR WARDEN: Right Worshipful Grand Junior Warden, it is the order of the Most Worshipful Grand Master that the cornerstone be now laid with Masonic honors; this you will proclaim to all present, that the occasion may be observed with due order and solemnity.

GRAND JUNIOR WARDEN: The Brethren and all persons present will take notice that the Most Worshipful Grand Master will now proceed to lay this cornerstone in due Masonic form. You will, therefore, observe the order and decorum becoming the important and solemn ceremonies in which we are about to engage.

GRAND MASTER: Right Worshipful Grand Treasurer, I now order you to deposit the corn, medals and papers in the place prepared for their reception.

The Public Grand Honors may then be given [without words].

The Square, Level and Plumb are then applied to the stone by the proper officers.

GRAND MASTER: Right Worshipful Deputy Grand Master, what is the proper jewel of your office?

GRAND MASTER: Have you applied the Square to those parts of the stone that should be squared?

DEPUTY GRAND MASTER: I have, Most Worshipful Grand Master, and the Craftsmen have done their duty.

GRAND MASTER: Right Worshipful Grand Senior Warden, what is the proper jewel of your office?

GRAND MASTER: Have you applied the Level to the stone?

GRAND SENIOR WARDEN: I have, Most Worshipful Grand Master, and the Craftsmen have done their duty.

GRAND MASTER: Right Worshipful Grand Junior Warden, what is the proper jewel of your office?

GRAND MASTER: Have you applied the Plumb to the several edges of the stone?

GRAND JUNIOR WARDEN: I have, Most Worshipful Grand Master, and the Craftsmen have done their duty.

GRAND MASTER: Having full confidence in your skill in the Royal Art, it remains with me to finish the work.

The Grand Master then gives three knocks upon the stone and says:

GRAND MASTER: I find this foundation stone well formed, true and trusty, and may this undertaking be conducted and completed by the Craftsmen, according to the Grand Plan, in Peace, Love, and Harmony.

The Deputy Grand Master then receives from the Grand Marshal the vessel containing Corn, and spreads the corn upon the stone, saying:

DEPUTY GRAND MASTER: May the health of the workman employed in this undertaking be preserved to them, and the Supreme Grand Architect bless and prosper their labors.

The Grand Senior Warden then receives from the Grand Marshal the vessel containing wine, and pours the wine upon the stone, saying:

GRAND SENIOR WARDEN: May plenty be showered down upon the people of this State, and may the blessing of the bounteous Giver of all things attend their philanthropic undertakings.

The Grand Junior Warden then receives the vessel containing Oil and pours the oil upon the stone, saying:

GRAND JUNIOR WARDEN: May the Supreme Ruler of the World preserve the people in peace, and vouchsafe to them the enjoyment of every blessing.

GRAND MASTER May the Corn of nourishment, the Wine of Refreshment the Oil of Joy, and all the necessaries of life abound among men throughout the world, and may the blessing of Almighty God be upon this undertaking, and may this structure here to be erected be preserved to the latest ages in order that it may promote the useful purpose for which it is designed

The Grand Master then presents the implements to the Architect, saying:

GRAND MASTER To you Brother Architect, are confided the implements of operative Masonry with the fullest confidence that by your skill and taste a fabric shall arise which shall add new luster to your fame as a Master Builder; may it endure for many ages, a monument of the liberality and benevolence of its founders

An oration suitable to the occasion may be then delivered. An ode may be sung and a prayer should conclude the ceremonies. After the leveling ceremony, the Brethren return to the Lodge room, the representation of the Grand Lodge is called back and closed.